This summary is compiled for birdsin.wales by Robin Sandham. Records featured are subject to acceptance by the British Birds Rarities Committee (bold capitals) and the Welsh Records Panel (bold italic capitals), where relevant. Please note that records will appear in this summary before they have been accepted by the appropriate record panel.

There was a real mix of weather during the month: widespread damage from Storm Barra over 7th-8th, some cold days before Christmas and the warmest New Year since temperatures were first recorded – 16.5 in Bala on New Year’s Eve. All of this didn’t seem to have a great effect on the bird records however.

The main rarity was a PACIFIC DIVER was at Eglwys Nunydd Reservoir 11-31st (Glamorgan). The RING-NECKED DUCKS were at Cardiff Bay on 5th, Kenfig NNR 21-31st, Lisvane Reservoir (Glamorgan) on 10-31st, Cosmeston on 10th, and remained at St. Ishmael’s (Pembrokeshire) on 9th. A SURF SCOTER was off Pensarn (Denbighshire) on 3rd and still off Broadhaven (Pembrokeshire) on 5-10th. A SMEW was still at RSPB Conwy on 1-2nd.

Two TUNDRA BEAN GEESE were at Tanybwlch (Ceredigion) on 28-31st. Five Russian White-fronted Geese on the River Clwyd (Flintshire) on 23-31st and 16 were at Dryslwyn (Carmarthen) on 19-20th. A GLOSSY IBIS influx is underway and birds were seen at Gowerton (Glamorgan) on 15th, Peterstone Wentlooge (Gwent) on 18th and the NWC (Carmarthen) 30-31st.

Three Spoonbills were at Dalton’s Point (Gower) on 9th, eight were at NWC (Carmarthen) on 5th. Cattle Egrets were at St Brides Wentlooge (Gwent) on 23-31st , Kidwelly (Carmarthen) on 26th and at least two other locations.

A Glaucous Gull was at Ynys Hir (Ceredigion) on 8th. CASPIAN GULLS remained at Cardiff Bay on 2nd and others were at Castlemartin on 20th and on the Gann (Pembrokeshire) on 12-16th and 25th. Iceland Gulls were at Pembroke Mill on 29th, on the Little Orme (Caernarfonshire) 19th onwards, on Ogmore Estuary (Glamorgan) on 22nd and Llys-y-Fran (Pembrokeshire) on 16-19th. A Sooty Shearwater was off Strumble on 10th. A Little Auk was off the Great Orme (Caernarfonshire) on 5th and a Grey Phalarope was at Tanybwlch (Ceredigion) on 11-13th.

A Great Grey Shrike was still near Llyn Brenig (Denbighshire) throughout with possibly up to four in the area. A ROSY STARLING was at Haverfordwest (Pembrokeshire) on 6th.

Water Pipits were at St.Brides Wentlooge (Gwent) on 7th, two were at Cors Ddyga on 5th, two were at Ogmore (Glamorgan) on 9th, Goldcliffe (Gwent) on 9th, at Tanybwlch (Ceredigion) on 15-19th. There were at least four very late Swallows: one (a locally ringed bird, which sadly perished) at Lake Vyrnwy on 7th, two at Pembrey (Carmarthen) on 10th and one at Ynys Llanddwyn (Anglesey) on Christmas Day.

Siberian Chiffchaffs remained at Kenfig on 2-29th, Kidwelly on 21st, Cardiff Bay on 26th, Dale on 15th , Porth Meuddwy 23-24th and two at Pontllyfni (Caernarfonshire) on 20-24th, Whiteford NNR on 31st. Very much a scarcity this year; a Yellow-browed Warbler was at Dale (Pembrokeshire) on 1-2nd. 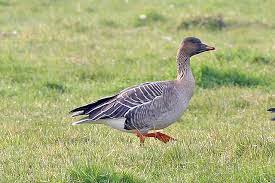